Rocky Mountain Testing Solutions has multiple environmental temperature chambers maintaining different set points that can be utilized for all of your accelerated aging needs. We will make sure that you satisfy the internal and industry standards of your project. Accurate and reliable accelerated aging results will be provided based on your requirements along with exceptional, personal service. When testing is completed, you will receive a detailed, clear report for your product qualification and third-party validation testing. If you are ready to test now or if you need assistance in developing a test specification, call RMTS. 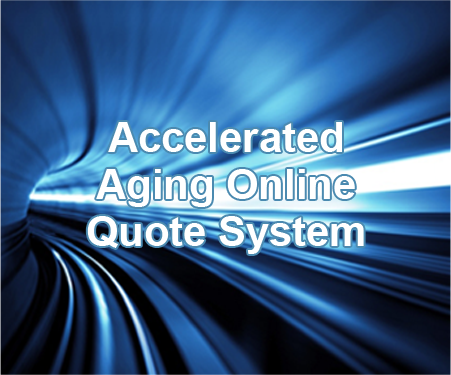 The common and conservative means of the accelerated aging calculation is based on the Arrhenius equation which states that a 10°C increase in temperature doubles the rate of chemical reaction. It is used to simulate real shelf-life aging and is conducted to validate shelf-life claims and document expiration dates. These accelerated tests help pinpoint possible seal and burst strength faults, leaks, and film delamination in medical device and pharmaceutical packaging. The tests are prominent in biomedical research, pharmaceutical, and medical device packaging and are a FDA requirement.

Accelerated aging is testing that uses conditions of heat, humidity, oxygen, sunlight, vibration, etc. to speed up the normal aging processes of items. It is used to help determine the long-term effects of expected levels of stress within a shorter time, usually in a laboratory by controlled standard test methods. It is used to estimate the useful lifespan of a product or its shelf life when actual lifespan data is unavailable. This occurs with products that have not existed long enough to have gone through their useful lifespan. For example, a new type of car engine or a new polymer for replacement joints.

Parts are run at very high speed, far in excess of what they would receive in normal usage. Polymers are often kept at elevated temperatures, in order to accelerate chemical breakdown. Also, the device or material under test can be exposed to rapid (but controlled) changes in temperature, humidity, pressure, strain, etc. For example, cycles of heat and cold can simulate the effect of day and night for a few hours or minutes.

The Arrhenius Equation - The Formula for the Calculation

The Arrhenius equation is a formula for the temperature dependence of reaction rates based on the work of Jacobus Henricus Van't Hoff in the late 19th century. Van't Hoff's equation for the temperature dependence of equilibrium constants suggests such a formula for the rates of both forward and reverse reactions. Arrhenius provided a physical justification and interpretation for the formula.

Currently, it is best seen as an empirical relationship. It can be used to model the temperature variation of diffusion coefficients, population of crystal vacancies, creep rates, and many other thermally-induced processes/reactions.

A historically useful overview supported by Arrhenius' equation is that, for many common chemical reactions at room temperature, the reaction rate doubles for every 10° Celsius increase in temperature.

Most Common Variables For Accelerated Aging

The calculator below generates a table of values for calculations based upon ASTM F1980, Accelerated Aging of Sterile Medical Device Packages.

Accelerated Aging Calculator
GET A QUOTE